Today my wife and I decided to walk to Lake George (from the Lake George Outlet Center). The distance is approximately 4 mikes.

We parked in front of the Log Jam Restaurant. Then we walked a few hundred yards along Route 149 and we came to the Warren County Bike Path. The trip is a pleasant walk through the woods on a paved bike path. The path is built on road bed of the the Hudson Valley Railroad, so the grades are very minor. If you start at the outlets, the entire trip is down hill (approx. 280').

Shortly after starting, there is a short side trip to the Ephraim Williams Jr. monument. Williams was killed during the Battle of Lake George. The path passes all the engagement sites of the Battle of Lake George. The Battle occurred in 1755, two years before the more infamous siege of Fort William Henry. The survivors of the siege were harried by Indian allies of the French along the bike path route. This event forms the context for James Fenimore Cooper's novel The Last of the Mohicans.

The path passes close to the current "Bloody Pond" site (on Route 9). However, it also runs parallel with a small stream (and it crosses it at several points). There is some debate whether the current site of Bloody Pond (on Route 9) is correct. An alternate theory was presented that the actual pond was created on the stream near the bike path.

For a short period the path veers toward Route 9. While the noise is a distraction, there is a nice bench and a Pepsi Machine that provides a nice respite. To get a good view of the Bloody Pond you have to take a short walk south on Route 9.

Continuing North on the path you will pass several motels, King Phillip Campsite, the Wild West Ranch and Magic Forest before it diverges away from Route 9. After a short distance the path merges on the Old Military Road. During the revolution, Henry Knox used this road to haul cannon from Fort Ticonderoga to General Washington. After a short distance on the Old Military Road, the bike path branches back into the forest. After a few minutes of brisk walking you get a glimpse of Lake George.

The path ends at the Road into the Lake George Battle Field State Park. You can take an interesting side trip into the park. There are quite a few interesting monuments, picnic table and restrooms.

After a short walk along Million $ Beach, you come to the pier of the Lake George Steamship Company. Here, for a dollar, you can board a Trolley and ride back to the parking area where you started.

Posted by DE Docent, NY Walkman at 8:44 PM No comments:

A few weeks ago (the week before Memorial Day) I was on vacation in Brigantine Beach. While there I managed to walk nearly every day. It was great for beach walks, especial to the north to the North Brigantine Wildlife Area. This wildlife area is part of the Edwin B. Forsythe National Wildlife Refuge. To the south, across an Absecon Inlet, is Atlantic City. I understand that Brigantine Beach is a bedroom community for many people who work in the Atlantic City Casinos. There is 24 hour bus service to Atlantic City. The fare was approx. $2.50.

The starting point for the walk is the Brigantine Inn. The Inn is a historic resort that was built in 1927. According to local lore the Inn was frequented by Al Jolson and Al Capone. I couldn't confirm this (using a casual internet search). However, there was a famous meeting of Mob Bosses in nearby Atlantic City in 1929 (2 years after the Inn was open). The Brigantine Inn has some historic memorabilia in their lobby. The hotel was build by the Brigantine Island Development Company in 1927. I included a photo of the Grand Opening program and an aerial view of the Inn (from 1929) in my slide show. The Grand Opening was presided by Ashbrook D. Snelbaker (who also owned a Monument Company in Woodstown, NJ). The program also mentions the Woodstown Fellowship Club. The great depression had a serious impact on the Brigantine Island Development Company. By 1940 ownership of the Brigantine Inn transferred to Father Devine, a somewhat flamboyant and controversial figure. Eventually ownership passed to a famous black business women, Sara Spenser Washington. Today the Brigantine Inn is a timeshare resort run by Celebrity Resorts.

The slide show was snapped one morning. The walk started at 7AM. I would guess that I walked for a half an hour before I ran across a couple of people walking south on the beach. For the next two hours I ran across a couple of dozen people at most. A few surfers, but mostly surf fisherman. At the Brigantine Inlet I looped back, until the sea wall. Then I returned by Brigantine Ave. On the way there is a small restaurant, Pirates Cove, that's great for breakfast (or lunch and dinner).

The walk outlined is over seven miles long. I also walked a shorter loop around a Lookout Platform in the Nature Preserve (3 1/2 miles). The slide show includes photos of both walks.

Posted by DE Docent, NY Walkman at 8:07 AM No comments: 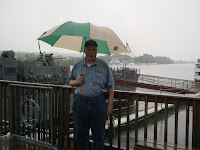 On the 6th of June I had planned a 5K walk in downtown Albany. I arranged discounted USS Slater tour coupons for everyone who participated. Unfortunately the 6th of June was a washout, and the DE Docent had to walk alone (which I did).

Albany is a great place to walk. I outlined two 5K walks with the USS Slater as a starting point. The 1st is a walk was along the the Corning Preserve. (about 1-1/2 miles). It includes a quick loop to the State Capital. The 2nd walk goes along Broadway, toward the visitor center and the AquaDuck Tour (also finishing with a loop around the capital).
Posted by DE Docent, NY Walkman at 7:34 AM No comments: