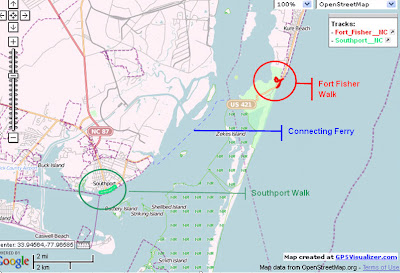 This is really two walks connected by a ferry ride. The 1st route is a short loop around Southport, NC (1.3 Miles). The 2nd is a short loop around Fort Fisher Historic site, NC (1.4 Miles). The two loops are connected by a short ferry ride. The Southport - Fort Fisher Ferry ride is a great, low cost trip ($5 one-way per car as of September, 2011). 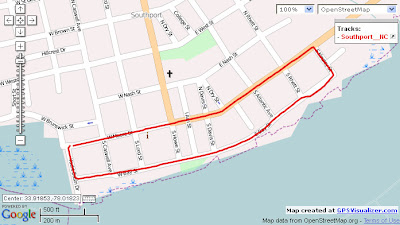 Southport North Carolina is a historic town located at the mouth of the Cape Fear River at the intersection of the Atlantic Ocean. The short walk features historic homes, huge live oaks, antique shops, art galleries, activities, parks and restaurants. The ferry is a few miles outside of the town. 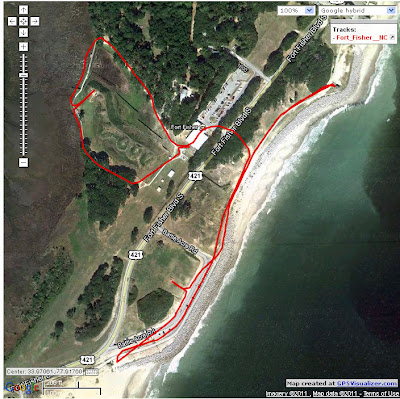 Fort Fisher is located on the north shore of the Cape Fear River outlet (opposite of Southport).  Today, only about 10% of the original Fort Remains.  The walk is the combination of two separate loops starting from the parking lot at the Fort Fisher Visitor Center.  The 1st loop is basically the guided tour (no cost) that starts from the visitor center.  The 2nd loop is a short loop across the highway on a walkway along the revetment.

I was familiar with the battle because I often walk in Oakwood Cemetery in Troy, NY.  Oakwood is the final resting place of many Union Veterans of the Battle including William Freeman (Medal of Honor Recipient) and General Alanzo Alden.

The fall of Fort Fisher was one of the major battles of 1865.  After the fall of Charleston, Wilmington, NC was the last port open to the Confederates. Fort Fisher was the key to closing the port.  In January of 1865 the Fort was captured by Union Forces (after the 2nd attempt).  Three months later the Civil War Ended. After the Civil war there were several controversies concerning the capture (on both the Union and Confederate side).