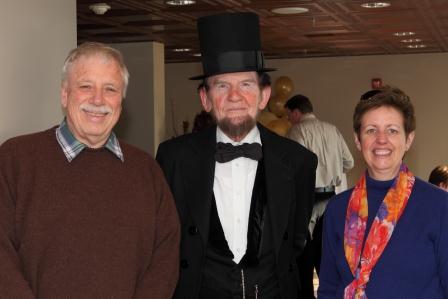 This weekend we visited Gettysburg, PA. and stayed at one of our favorite B and Bs - the Gaslight Inn.  A new restaurant was opening - One Lincoln (btw - excellent dinner) and we had the honor of meeting Abe Lincoln (actually, Jim Getty a well known Lincoln actor and historian).

We had a great discussion about Abe Lincoln's visit to Albany, NY on February 18th, 1861.  Jim Getty knew all about the visit. We also discussed a well known actor who was performing in Albany at the time.  Even though Mr. Lincoln was a BIG fan of the theater, he was just too busy to see the play.  However, Abe/Jim Getty noted that he had heard that the actor was injured by an accident with a dagger.  I told Mr. Lincoln (incorrectly) that a jealous girl friend caused the wound.

I wasn't totally wrong.  It seems that the infamous actor visited Albany, NY on several occasions from February until April in 1861, and he was wounded twice!  The 1st time was February 12th, a few days before Mr. Lincoln was there; and the 2nd (when a jealous girlfriend stabbed him) was a few months later.

See John Wilkes Booth performing in an Albany theater! - "...After his performance in Evadne, after the actors returned to the Stanwix Hotel to unwind and drink, Booth got into a fight with his then-girlfriend, actress Henrietta Irving, who claimed that Booth had promised to marry her – and then abruptly changed his mind. Irving lunged at Booth with a knife; Booth parried the knife away, but the glancing stab lacerated Booth’s cheek. That night, thinking that she had murdered her lover, Henrietta Irving would later stab herself in a failed suicide attempt. During his time in Albany, John Wilkes Booth almost stabbed himself in one performance, and was almost knifed after a second. Albany was obviously not a safe place for him, and he never performed in the Capital District again ...".
Posted by DE Docent, NY Walkman at 2:19 PM